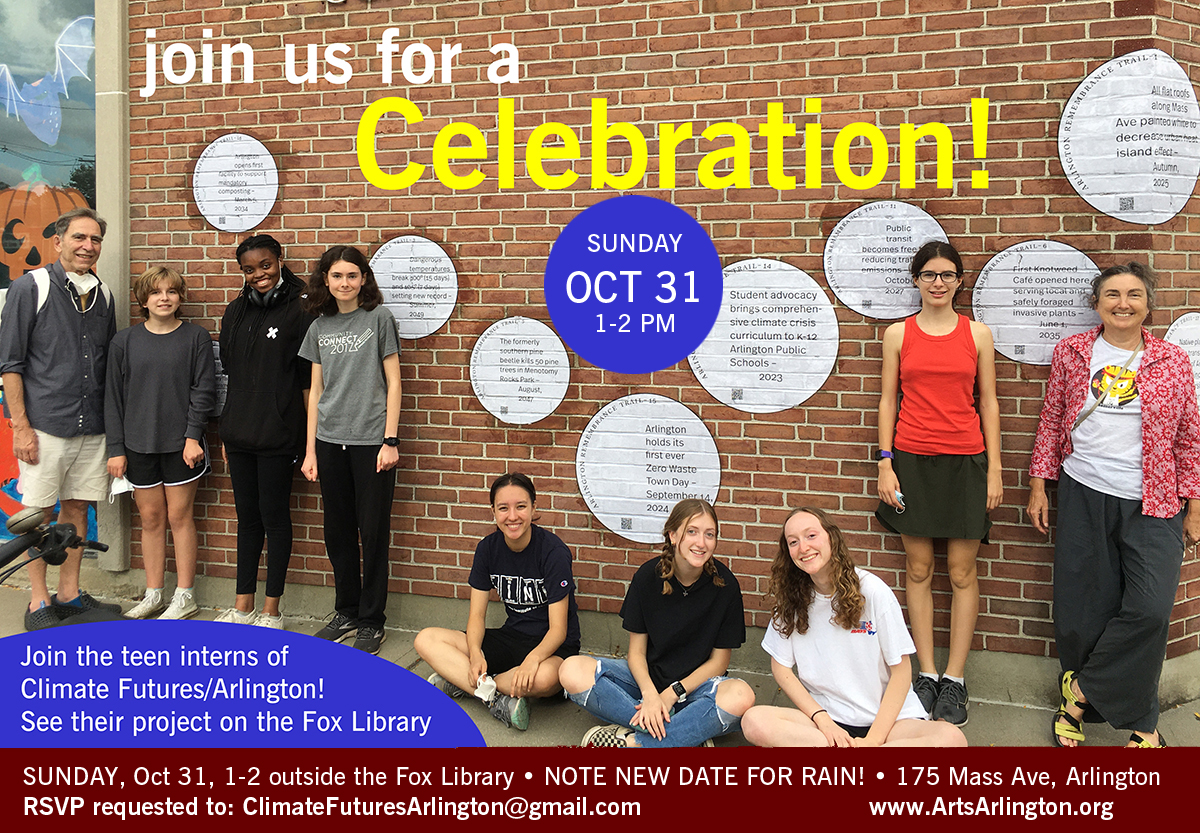 Join the Arlington Commission for Arts & Culture for an open-air celebration of the achievements of 12 Arlington High School interns this SUNDAY, OCT 31 FROM 1 TO 2 PM (rescheduled for rain).  They spent the summer working with public artist and graphic designer Tom Starr on Remembrance of Climate Futures/Arlington on a series of markers – inspired by historic trail markers – calling attention to climate change. More info about the event.
DATE: We’ve changed to our rain date of Sunday, October 31, 1 – 2pm.
LOCATION: outside the Edith M. Fox Library (175 Massachusetts Avenue, East Arlington) 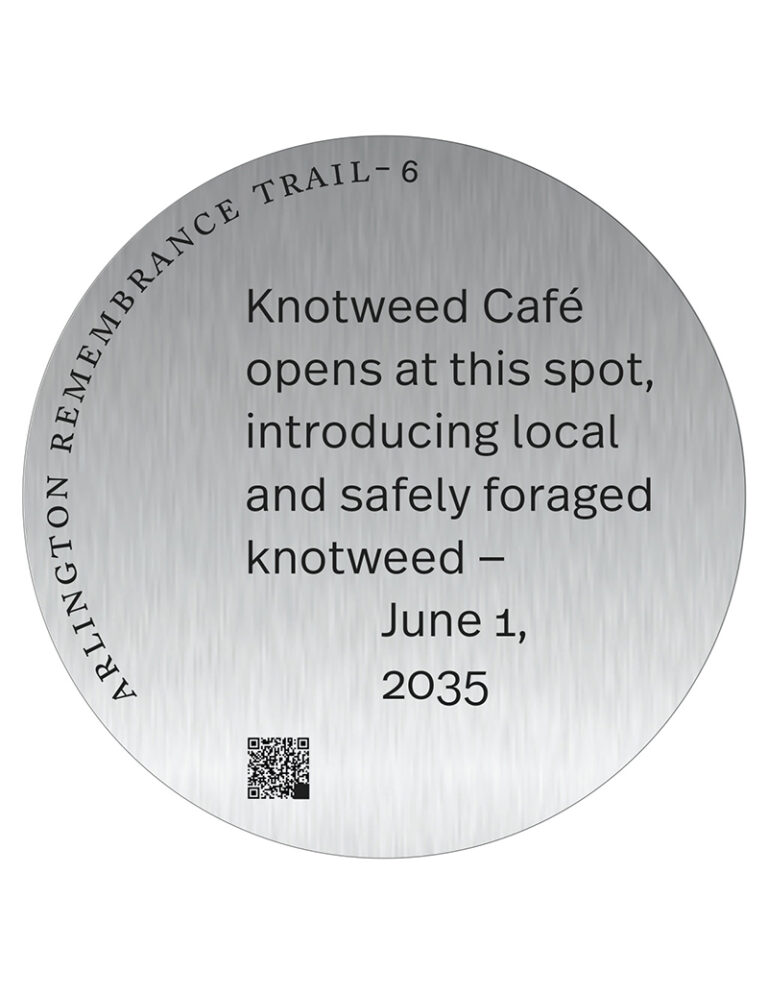 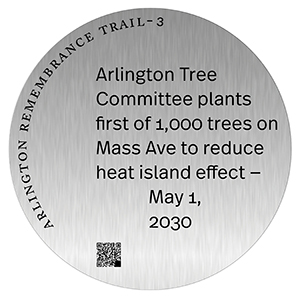 This youth-led public art and environmental education project builds on Northeastern professor Tom Starr’s ongoing project calling attention to the impacts of climate change on human neighborhoods and natural areas in New England. For his regional public art project, Starr typically works with local governments, stakeholders, and nonprofits to develop the content for simple circular markers for public spaces. For our Arlington version, we are working with Starr to reimagine his project as intergenerational, youth led, and inspired by the work of Arlington’s engaged volunteers – including town commissions, activist groups and nonprofits focused on environmental and social justice issues.
Starr’s markers use the visual language of interpretive signs – commonly made for parks, trails and historic sites – designed to bring history into the present day. On this date and this spot: a wagon train left to head west; a fire destroyed a mill; a protest won better conditions. But the markers of Remembrance of Climate Futures commemorate things that have not yet happened. They are deliberately designed to look ordinary and to infiltrate local streets with possible future scenarios and decisive moments in the climate crisis which will unfold in the next 50 years. A high flood mark, a new bird migrating through, a mitigation engineering feat, a lost species. They are speculative; they invite us to imagine what our future may look like when it is seen from the vantage point of the 22nd century, by generations looking back at this pivotal time.
Our process
Students recruited from Arlington High School have explored how civic and activist groups envision the impacts of climate change, and what ideas they have for increasing resiliency. Based on attending meetings, zoom conversations, and hearing from guest speakers combined with research, the students have developed 18 markers which will be wheatpasted to the exterior walls of the Fox Library in October as a temporary project. In the spring, our hope is to complete a longer term version of the project in the form of aluminum markers sited around town at locations related to the events “commemorated” in the markers.
Project blogs and website
The interns are finalizing climatefuturesarlington.org. This project website includes their weekly blogs – some of which are below – the text of all their markers, and written descriptions for each marker with more information and links
Resiliency
Student interns learned about the impacts of climate change – flooding, extreme storms and heat, species extinctions – but they also researched strategies to combat climate change. In addition to addressing the crisis by reducing carbon footprint, they learned about resiliency strategies such as white roofs, cooling centers, wetlands preservation, tree planting, and green infrastructure. Implementation of some of these resiliency strategies appear in the markers as future actions.
Project Organizers and Funders
Climate Futures/Arlington is organized by ACAC in collaboration with Arlington Public Schools Sustainability Initiatives and Arlington Planning and Community Development. Cecily Miller, ACAC’s Public Art Curator, and Rachel Oliveri, Arlington Public Schools Sustainability Coordinator, served as project coordinators and mentors. Climate Futures/Arlington is generously funded by a grant from MAPC (Metropolitan Area Planning Council) and contributions from Arlington DPW, Sustainable Arlington, and individual supporters.

Many thanks to our partners

In addition to our primary partners – the Arlington Department of Planning and Community Development and the Arlington Public Schools Sustainability Initiatives – we are grateful to the many community groups, town commissions and town personnel who generously participated in making this project a success, and to the Fox Library for hosting our wheatpaste installation! In particular we would like to thank the project partners who took the time to meet with our interns: 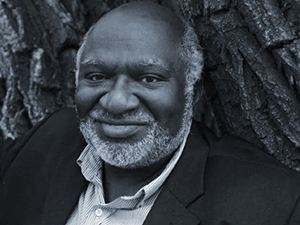 Student Conversations on Climate Change: Meet and Greet
by Clara Schneider, Rachel Barglow, Tamaki Sugihara
Meet and Greet
On July 19, 2021, we met with 15 diverse Arlington organizations in a meet and greet via Zoom. This meet and greet allowed us to interact and learn from members of these organizations about their various goals and achievements. Organizations in attendance included groups focused on eliminating waste, groups with a focus on organized activism, organizations with an emphasis on environmental equity, groups that protect open spaces, and many more.
Food Links and Zero Waste Arlington both share a theme of waste reduction. Food Links is a nonprofit organization that tackles the environmental consequences of wasting food; food waste generates seven percent of the world’s greenhouse gas emissions. Food Links redistributes food to low-income individuals and vulnerable populations. On the other hand, Zero Waste Arlington, colloquially known as the ZWA, is a volunteer committee appointed to advise the town by advocating for Massachusetts’ goal of municipal solid waste reduction; recycling is their major focus, but they have other campaigns to reduce plastic, promote repair and reuse, and raise awareness.
Several groups talked about their campaigns to raise awareness on the urgency of the climate crisis. The world-wide organization Extinction Rebellion practices non-violent civil disobedience and uses art and theater during protests organized by local chapters, including one based in Boston. In Arlington, a combination of volunteers from Extinction Rebellion and other activists joined together to convince the Town Meeting Members and Select Board to declare a Climate Emergency in Arlington. The Arlington chapter of Mothers Out Front organizes protests, but also focuses on passing legislation at a local level. Sustainable Arlington focuses on local policies and regulations as well, but uses public events to bring attention to climate issues. They recently campaigned for rules banning new gas hookups in larger developments.
Thoughts from the Arlington Human Rights Commission and the Arlington Tree Committee presented the relationship between equity and climate change. Representatives from both groups expressed concerns about the connection between tree canopy density and hot zones in Arlington. Trees reduce urban heat island effect and keep areas cooler by providing shade. Hot zones often appear in lower-income communities where fewer trees are planted, illustrating the exacerbated effects climate change often has on marginalized groups.
Coming from a different perspective, a number of groups have focused on the preservation of local open spaces and nature sanctuaries. Attendees with this focus included the Friends of Spy Pond, Mystic Charles Pollinator Pathways, Mystic River Watershed Association, and the Arlington Open Space Committee. The groups listed work on tasks such as improving water quality, protecting wildlife, and restoring parks. Many other groups from the surrounding area interested in collaborating with us and concerned about the climate crisis also attended, such as East Arlington Livable Streets, Green Cambridge, and the Unitarian Universalist Church Climate Working Group.
Even in such a short meeting with a tightly packed agenda, we had the opportunity for interesting discussions in breakout rooms and in the chat. Several attendees gave us ideas for trail markers for our project, and others provided insight on effective ways to design them. We cannot even begin to imagine the amazing content we would think up together if we had more time!
While many organizations had overlapping memberships and a history of collaboration, some had never even heard of each other. This meet and greet event helped strengthen existing ties and assisted in the formation of new ones. We were impressed to hear about so many different organizations, and the gathering reiterated that there is a place in the environmental movement for everyone. Arlington has groups that do everything from sit-ins to street cleaning, all working together to make Arlington, and our future, as sustainable as possible.
Remembrance of Climate Futures/Arlington is organized by the Arlington Commission for Arts and Culture, the Arlington Public Schools Green Teams, and the Arlington Department of Planning and Community Development with grant support from the Metropolitan Area Planning Council.