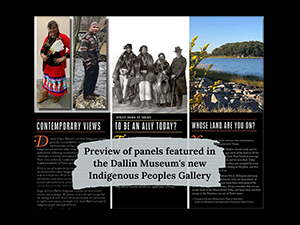 The Cyrus Dallin Art Museum is currently closed through mid-July for the installation of a new Indigenous Peoples Gallery exhibit and a redesign of the entry hall. This exciting project is supported by funds from the Massachusetts Office of Travel and Tourism and the Freedom’s Way National Heritage Area Partnership Grant Program.

The state funds were facilitated by Representative Sean Garballey, who worked with a team from the museum that included the Chair of the Friends of the Dallin Museum Stephen Gilligan and Board of Directors President Geri Tremblay, as well as board members Nancy Blanton, Andrew Jay and Dan Johnson, Director/Curator Heather Leavell and Treasurer James Charnley. “The Dallin Museum sincerely thanks Representative Garballey for his leadership in securing this important grant,” says Tremblay.

In the museum’s redesigned spaces, visitors will experience the fascinating and nuanced history of Cyrus Dallin’s art and legacy through multiple vantage points and perspectives. The new gallery will explore Dallin’s representations of Indigenous peoples within the context of his own time, intentions, and personal values, while also centering the experiences, histories, and cultures of Indigenous people of the past and present. Interpretive themes encourage visitors to explore how Dallin’s legacy resonates today and what we can learn from his example.

“This project represents the culmination of years of research on Cyrus Dallin’s legacy as an ally and Indigenous rights advocate, and reflects the museum’s ongoing commitment to fostering dialogue on issues that remain important to Indigenous peoples and impact all of us,” says Leavell.

The Dallin Museum is planning a public re-opening celebration, which will likely be held in mid-July. Updates will be posted at Dallin.org and the Museum’s Facebook, Instagram, Linked In and Twitter accounts.

For art and history enthusiasts of all ages, experience the masterful public works created by the celebrated American sculptor, Cyrus Dallin, for his adopted hometown. Learn the stories behind notable memorials and historic buildings, including the Uncle Sam Memorial Statue (1976), Soldiers and Sailors Monument (1887), and the art deco Arlington Co-operative Bank (1934).

Before or after the tour, plan to visit one of the many wonderful restaurants in Arlington Center! The tour starts in front of the Cyrus Dallin Art Museum, 611 Mass. Ave., Arlington center. Metered parking is available in the lot behind the building. The May 27 tour is being offered in conjunction with the Freedom’s Way National Heritage Area’s Hidden Treasure’s program. Admission is free. Tickets for subsequent programs are a suggested donation of $10 per person. Register at Dallin.org/events.

Founded in 1998, the Cyrus Dallin Art Museum is the only museum in the U.S. solely dedicated to preserving the legacy of this internationally recognized artist, educator and Indigenous rights advocate. With exhibits of more than 100 works, including approximately 50 sculptures, 10 paintings, and several coins and medals, the museum promotes new insights into our shared history by exploring the life, work and values of this celebrated sculptor.