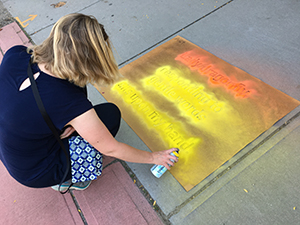 Arlington has been waxing poetic during the pandemic, first through the inspiring series of Red Letter poems circulated by Town Poet Laureate Steven Ratiner, then by the multimedia collaboration of Walking Poetry installations on the bike path by visual artist Adria Arch and poet Jesse Brown, and most recently, on the sidewalks of the Cultural District.

Starting this week, the Arlington Commission for Arts and Culture began installing a series of haiku collected during a 2018 project, Bikeway Haiku, which originally sourced the short Japanese-form poems from town residents on themes inspired by the Minuteman Bike Path. The project was originally conceived and organized by ACAC curator Cecily Miller to celebrate the Minuteman’s 25th anniversary. The poems were selected by Committee of three poets – Charles Coe, Grey Held, and Gloria Mindock – and stencils were laser cut by artist Liz LaManche.

This latest incarnation makes use of additional public-sourced poems that are colorfully stenciled onto the pavements on both sides of Mass Avenue, extending from Capitol Square in East Arlington through “the Gap” of the Cultural District toward Arlington Center. Some poems celebrate local wildlife and the natural environment, while others are odes to commonly encountered Town scenes, from biking to watching a dog sniffing during walkies.

“As a dedicated walker, even before the COVID crisis, I have long pounded the pavement throughout E. Arlington,” said one observer on the Arlington List. “In the past couple of days, I was delighted to discover a good number of stenciled 3-line poems on the Mass Ave sidewalks. Very peaceful, imaginative, and quite a few relating specifically to Arlington. Kudos to the poet/artist who enriched my daily walk!”