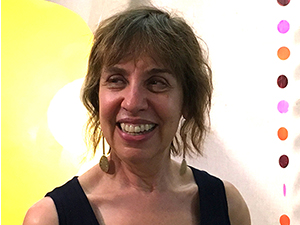 We’re pleased report that the Arlington Center for the Arts will be presenting the 2020 Alan McClennen Community Arts Award to Arlington resident and public art pioneer, Adria Arch.

Adria Arch is an Arlington-based visual artist whose work has been widely exhibited across New England, the country, and internationally. She is also an educator and proponent of the arts in civic life. Since 2010, Adria has been involved in bringing public art programming to Arlington, and she is a member and former co-chair of the Arlington Commission for Arts and Culture.

The Alan McClennen Community Arts Award was formed in 2007 to honor a local individual or group who brings to life ACA’s mission of “transforming lives and building community through the arts.” The award is named for former Arlington Town Planner Alan McClennen, who was a driving force behind the creation of the Arlington Center for the Arts in 1988, which is now a true community gem, offering unsurpassed arts education and programming to Arlington and surrounding communities.