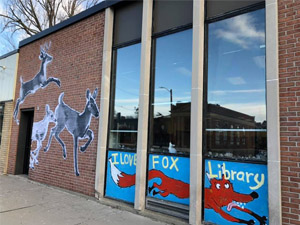 Have you noticed the large deer, bear, fish, and fox families gathered on the walls of the Fox Branch Library in Capitol Square, East Arlington? This temporary installation uses a street art technique called “wheat paste” to attach giant versions of small scale drawings to brick walls, transforming an intimate art form into the scale needed to fill a public space. The paintings of local wildlife are by Eileen de Rosas and her installation is the final project commissioned by Arlington Public to support the town’s BRT Pilot Project – which aimed to improve local public
transportation for a more sustainable world.

“In the past few years urban wildlife has made a comeback of sorts. It’s been amazing to see bald eagles and coyotes, as well as the ubiquitous bunnies. When I grew up here in Arlington, the only animals I saw were squirrels and opossum,” de Rosas explained. “Since the mural is on the Fox Library, there needed to be foxes,” she continued. Her next words reveal the deep kinship she perceives between animals and people. She could be describing any of the human families who find a second home in the welcoming spaces of this beloved branch library: “The vixen is smiling at the two kits who are running to greet her, and at the bottom of the wall, is a resting fox face. He is happy because he took the bus and now he can rest and sleep!” This is a perfect ending to the story of our BRT Public Art Project, since investing in public transport will ultimately shape a more sustainable, safe and peaceful world for all of the planet’s inhabitants.

Many thanks to the staff and Trustees of the Library for their generous support of La Passeggiata. This project, along with public art in and around five bus shelters and a mural on Za Restaurant, was made possible with a grant from the Marion Institute and Barr Foundation and organized in collaboration with the Arlington Department of Planning and Community Development.